In the 16th century, the Germans played a game where bluffing predominated called “Pochen”. It was later developed into a French version, called “Poque”, which was eventually brought to New Orleans and played on the riverboats that sailed down the Mississippi.

In the 1830s, the game was refined and became known as Poker. During the Civil War, the key rule was added that allowed cards to be drawn to improve the hand. A variation – Stud Poker – appeared around the same time. There are hundreds of versions of poker, and it is played not only in private homes, but also in numerous famous casino rooms. Poker can be played socially with pennies, matches or beans, or professionally with real money involving thousands of Euros/Dollars.

It takes luck to play poker, but the game also requires incredibly great skill, and each player is the master of his or her own destiny.

THE PACK OF CARDS.

The standard pack of 52 cards, sometimes with the addition of one or two jokers, is used. Poker is a game that uses only one pack of cards, but today, in virtually all games played in clubs and among top players, two packs with contrasting colors are used in order to speed up the game.

While one pack of cards is being dealt, the other is being mixed and prepared for the next game. The procedure for two decks of cards is as follows: While the game is in progress, the Croupier gathers all the cards from the pack he dealt previously, shuffles them, and places them to the left of the table. When the time comes for the next game, these cards are shuffled and passed to the next dealer. In many games where two decks are used, the opponent to the left of the dealer cuts the deck instead of the opponent on the right.

In clubs, it is customary to change cards frequently and allow either player to ask for new ones whenever they wish. When new cards are introduced, both packets are replaced, and the seal such as the cellophane wrapping of the new decks should be broken in full view of all players.

Poker is played in countless ways, and a player who understands the values of the cards in his hand as well as the principles of betting can play without difficulty in any kind of variation of the game.

Except in some versions of the game, a poker hand consists of five cards. The various combinations of hands range from five of a kind (the highest hand) to no pair or nothing (the lowest hand):

Five of a Kind – This is the highest possible hand and can only occur in games where at least one card is a wild, such as a joker, the two one-eyed jacks, or the four deuces. Examples of five of a kind would be four 10s and a wild or two queens and three wilds.

Four of a Kind – This is the next highest hand, and is ranked just below a Straight Flush. An example would be four aces or four 3s, no matter what the fifth card is.

Full House – This colorful hand is made up of three cards of one rank and two cards of another rank, which can be three 8s and two 4s, or three aces and two 6s.

Three of a Kind – This combination has three cards of the same value, and the other two cards of a different value and an example will be three jacks, a 7, and a 4.

One Pair – This frequent combination has only one pair, the other three cards being of different value. An example would be 10, 10, K, 4, 3.

No Pair – This very common hand has “nothing”. None of the five cards has a pair, nor are all five cards of the same suit, consecutive, or of the same value. When more than one player has none of the above hands, they are ranked by the highest card each hand fears so, as an example, that a hand with an ace beats a hand with a king and so on. 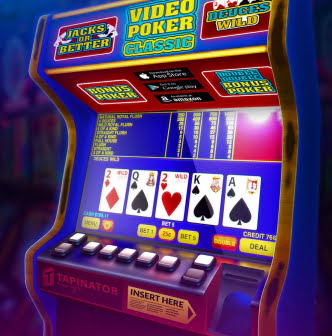 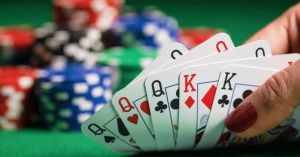